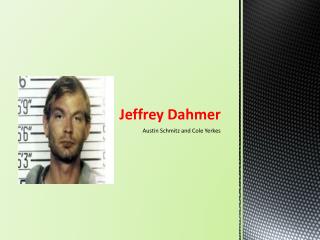 The Most Pop Singer In USA Jeffrey Bewley - Jeffrey bewley the terms were later adopted within bel canto, about the

Psychopathy - . into the mind of a serial killer…. jeffrey dahmer. born 1960 looked for dead animals to dissect as an

Jeffrey C. Jackson - An efficient membership-query algorithm for learning dnf with respect to the uniform distribution.

The Anatomy of a Murderer - . by daniel randall. murderers and serial killers. a murderer is someone that kills another

JEFFERY DAHMER - . by: anchal sheenmar. childhood . jeff was born on may 21,1960 in west wisconsin. his father lionel

Jeffrey Dahmer - . by: thompson grant. family life. parents got divorced and his mom left him he suffered from low self