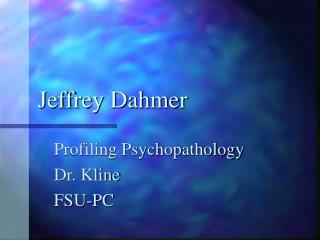 Jeffrey Dahmer. Profiling Psychopathology Dr. Kline FSU-PC. Jeffrey Dahmer-early years. Jeffrey Dahmer had a fairly normal childhood living with his parents in the Mid-West. Dahmer, an attractive, shy kid, did okay in school, and kept to himself.

Jeffrey Dahmer - . by: thompson grant. family life. parents got divorced and his mom left him he suffered from low self

Jeffrey Dahmer - . by: amber kelly. background. born in milwaukee on may 21, 1960 grew up in a loving household of lionel

Jeffery Dahmer - . the milwaukee cannibal . by maddie christenson. background. born in milwaukee on may 21,1960 was a

Dahmer Talk - . questions to think about???. topic 1. we get a peek of dahmer’s mean spiritedness when he meets the

JEFFERY DAHMER - . by: anchal sheenmar. childhood . jeff was born on may 21,1960 in west wisconsin. his father lionel

Jeffrey Sterner - Much of jeffrey

Jeffrey Volosin - Jeffrey grew up in southern ca. in high-school, he swam and competes varsity athletic game all four

Jeffrey Pell - When jeffrey pell isn't working for convergent as an information technology professional, he likes to

Jeffrey Lichtman - Hi, my name is andrew biscal. i've started this site to present a platform for attorneys like jeffrey

Jeffrey Lichtman - Is a brilliant criminal defense lawyer that has a high standing among his peers, media and the

All about Jeffrey - . all about me [jeffrey]. my friends. my favourite toys. jing rips storm pegasus. . and this is