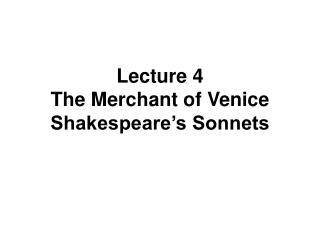 The art of the Venice Biennale - Highlights from the 57th biennale international art exhibition in venice,

Illustrations of “The Merchant of Venice” - . richard parkes bonington. bassanio and portia, c.

All that glitters is not gold - . william shakespeare , the merchant of venice act ii - scene vii - prince of

“SHAKE-UP” - . like shakespeare, teachers are forced to simplify their knowledge to gratify the bad tastes of the

Shakespeare &amp; Elizabethan Times - . why shakespeare?. shakespeare wrote about: universal themes the ugly side of