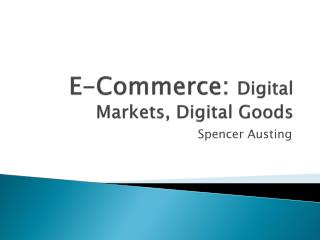 E-Commerce: Digital Markets, Digital Goods. Spencer Austing. Zagat. Started in 1979 Collects information from surveys of customers of restaurants, hotels, and night life. From surveys they create an aggregate review of an establishment for subscribers to utilize. Digital commerce - . ali al kuwari and muji hwang. what is it. it is the buying and downloading of things on the internet

Delivering the (Digital) Goods or - . the canary in the coal mine. jim noble warner music group. “there is nothing more