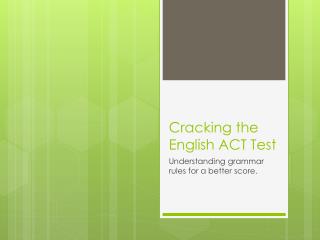 Cracking the English ACT Test. Understanding grammar rules for a better score. Sentence Structure- fragments Sentence fragments- Missing a subject or verb. 1. Dependent clause waiting for a second half- As the children ran behind, shouting and laughing. A. No Change B. While the How to Crack Competitive Exams - Tips & Techniques - If you are a student & want to crack your exam, then must

ACT Tips - . take notes! *examples are taken from the princeton review cracking the act *kaplan act premier . about the

ACT Reading See Through the Camouflage! - . you’ll raise your act score if you learn to: recognize camouflage, then

Grammar, Punctuation and Usage - . how do we use them?. the apostrophe. apostrophes show possession miss peister’s