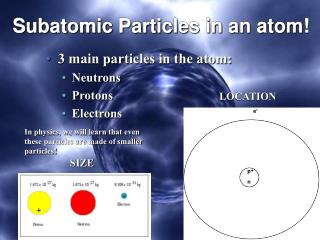 Subatomic Particles in an atom!. 3 main particles in the atom: Neutrons Protons Electrons. LOCATION. In physics, we will learn that even these particles are made of smaller particles!. SIZE. Remember, most of an atom is empty space!. Colors in the Sky - With a severe solar storm raging, the northern lights, or aurora borealis, could be seen from the

Fine Atmospheric Particles: Do we need to worry about them?? - . almost all combustion leads to the formation of fine

Chapter 5 - . electrons in atoms. greek idea. democritus and leucippus matter is made up of indivisible particles dalton

1. Which of the following particles is negatively charged? - . electron isotope neutron proton. 2. identify the proteins

Electricity - . electric charges : the basis of electricity is charge. the charge on an atom is determined by the

Chemistry - . the origin of chemistry can be traced to alchemy, or the art of converting metals like copper to gold .

Chemistry - . the origin of chemistry can be traced to alchemy, or the art of converting metals like copper to gold.