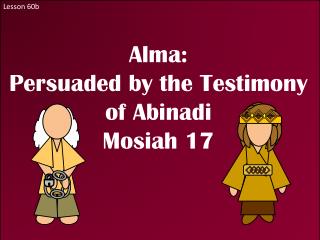 Lesson 60. Lesson 60b. Alma: Persuaded by the Testimony of Abinadi Mosiah 17. The Role of the Redeemer Mosiah 15-17. Lesson 60. Fire of Testimony and Death. Abinadi ‘s words kindle a fire of testimony. Lesson 60 - . what are we asking god to do when we pray the sixth petition?. who deceives us or leads us into

Lesson 60 - . good manners with neighbors and all muslims. proper manners towards neighbors:. not to hurt them by words

Level 3 Language Arts with Ms. Sheri Lesson 60 - . final assessment. before we begin we will review some test taking

This is a 60 in 60 Challenge: 60 questions in 60 minutes - Some are designated as calc active. the expectation is that

60 Gadgets in 60 Minutes - Or how many gadgets can i take before my mind blows up? barbara fullerton, manager of

Chapter 1 Lesson 4 - . objective: to find the length of segments and measures of angles. postulate 1-5 ruler postulate.