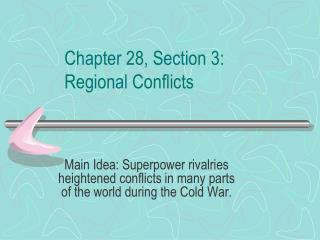 Chapter 28, Section 3: Regional Conflicts. Main Idea: Superpower rivalries heightened conflicts in many parts of the world during the Cold War. A. The Cold War in Africa and Asia. Many European colonies in Africa & Asia gained their independence after WWII

Conflicts and Comforts - . can we live in this world without conflicts always?. the answer is: …. no !. why not ?.

The Wars for the West - . section 1 chapter 18. focus questions. what animals did the plains indians use, and why were

Chapter 2 The Birth of a Nation - Standard ushc-1: the student will demonstrate an understanding of the conflicts