What is Beowulf ? - PowerPoint PPT Presentation 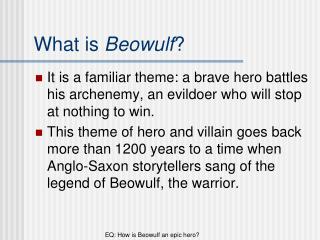 What is Beowulf ?. It is a familiar theme: a brave hero battles his archenemy, an evildoer who will stop at nothing to win. This theme of hero and villain goes back more than 1200 years to a time when Anglo-Saxon storytellers sang of the legend of Beowulf, the warrior.

Beowulf - . themes. the importance of establishing identity tensions between the heroic code and other value systems the

Beowulf : Lines 1681-1750 - . hrothgar looks at the hilt beowulf gives him. it is etched with images of history. beowulf

Beowulf - . day 8. warm-up. warm-up – what are five things in beowulf that you are confused about? how can you

Beowulf - . beowulf manuscript background . beowulf is the first surviving epic written in the english language. the

Notes on Beowulf - . lines 836-1650. similarities shared by beowulf and sigemund. the story of sigemund’s exploits

BEOWULF - . beowulf. written in old english sometime before the tenth century a.d., describes the adventures of a great