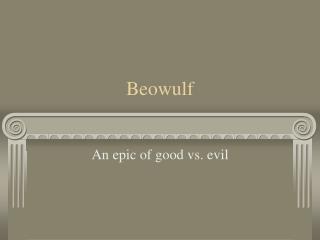 Beowulf - . the story begins. beowulf was recorded sometime during the early 1700s, but it thought to be origionated

Beowulf - . day 5. standards. objectives. students will be able to… compare and contrast identify and utilize read and

Beowulf - . the epic poem, hero, and beast. epic poem. long narrative poem about the feats of a hero (entertainment) hero

Beowulf - . beowulf is the first great work of national literature. like most heroic literature, beowulf is oral art.

Beowulf - . poet unknown anglo-saxon and old english christian (but with a bit of pagan tradition) epic poem (with 3,182

BEOWULF - . parts 1 through 3 the monster grendel. part 1. the poem begins by contrasting two settings: the dark,

Beowulf - . parts 4 through 7. part 4 – the arrival of the hero. beowulf, the hero of the epic, arrives to aid hrothgar

Beowulf - . an epic tale. the epic tradition. beowulf is one of the world’s oldest recorded epics. characteristics of

Beowulf - . day 7. standards. objectives. students will be able to… compare and contrast identify and utilize read and

Beowulf - . beowulf. beowulf is the oldest written example of what eventually became the english language. but first,