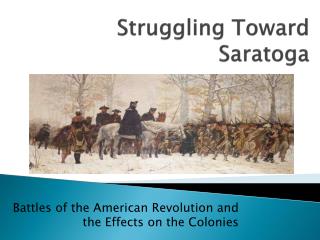 Struggling Toward Saratoga . Battles of the American Revolution and the Effects on the Colonies . The War Moves to the Middle. The British retreated from Boston in March 1776 and moved the war to the Middle states. The focused their efforts on New York, New Jersey, and Pennsylvania.

THE DIP- Teaches you when to quit and when to stick - . seth godin. strategy?. persist!!!!. almost everything worth doing

The War for Independence - Chapter. the war for independence. 4. overview. time lines. 1. the stirrings of rebellion.

THE BATTLE OF SARATOGA - . this was a huge american victory – led by horatio gates. the battle of saratoga. because of

Struggling Toward Saratoga - . battles of the american revolution and the effects on the colonies . the war moves to the

The Peterloo Massacre - . by: aneesh gowri period 3 kinberg. a little background . habeas corpus – stated that if the

Struggling Toward Saratoga - . chapter 4 section 3. i the war moves to the middle states a. defeat in new york. british

Saratoga: A Turning Point - . 5. battle of saratoga: burgoyne’s army retreats and is surrounded by the continental

How to Grow your Business using Facebook - Are you struggling to figure out the facebook algorithm? here are some