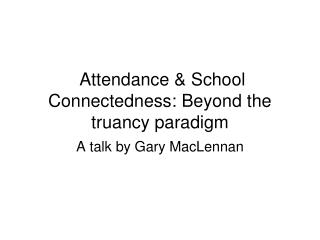 Attendance & School Connectedness: Beyond the truancy paradigm. A talk by Gary MacLennan. Reform & Innovation in Indigenous Education. Is philosophy worth it? Towards the Connected school Othering Innovation: The Leadbeater Grid. The Concrete Universal. Universal Common Core Humanity Fostering School Connectedness Overview - Objectives. after completing this program, the participants will be able

Truancy in the Binghamton City School District - . defining the problem, assessing where we are and coming up with