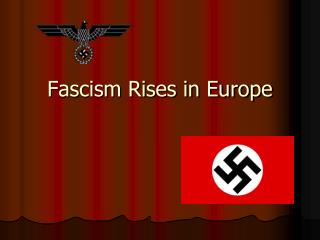 Fascism - . fascism. a.a system of government marked by centralization of authority under a dictator, stringent

Benitio Mussolini: &quot;What is Fascism?&quot; (1932) - The rise of fascism &amp; militarism in italy,

Fascism in Japan? - . what is fascism?. organization. fascism, is a radical and authoritarian nationalist political

Fascism and the road to World War II - . fascism in italy . fascism : loyalty to the state and obedience to its leader;

Fascism in Italy and Spain - . by: will pride and karyn werner. benito mussolini. 1921+1922 came to power his party

Ernest Hemingway, The Sun Also Rises (1926) - . “you are all a lost generation.” gertrude stein. expatriation and

Chapter 31, Section 3: Fascism Rises in Europe - . in response to political turmoil and economic crises, italy and

Rise of Fascism - . eq: why did fascism rise in europe?. what is fascism?. according to webster’s

Goal 10 World War II - . causes. the rise of dictators. mussolini and fascism in italy. the first major dictatorship in