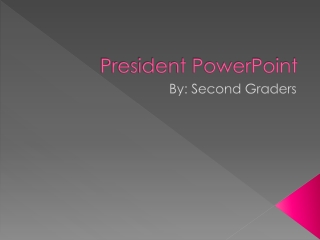 PowerPoint on PowerPoint - . a guide to creating engaging, enjoyable, and exciting presentations. by: mike karlin. step

PowerPoint on PowerPoint - . a little why with a dash of how. why make powerpoint presentations?. easy to create and

PRESIDENT AND VICE PRESIDENT - . narfe duties and responsibilities. primary duties of the president. support the mission

PRESIDENT: - Emblem ceremony. president: “the emblem is symbolic of the skillsusa organization. you are about to

President - . recent us presidents: a survey. who succeeded jfk in 1963? lyndon johnson andrew johnson a movie-star

President # - Kaydee fry a-4. president #. mckinley was born in niles, ohio in 1843. he was the seventh child born to

President - . officer positions:. “if you fail to plan, you plan to fail”. 2012-2013 cdcki membership development and