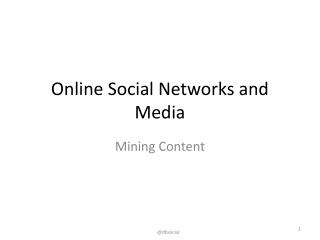 Online Social Networks and Media - . influence maximization. maximizing spread. suppose that instead of a virus we have

Online Social Networks and Media - . epidemics and influence. epidemics. understanding the spread of viruses and

Social Media Networks - . what can they do for you?. social networks allow people to…. establish a presence connect

The social networks of social media - . what the past minute looked like. 277,000 logins on facebook 1.3 million views on