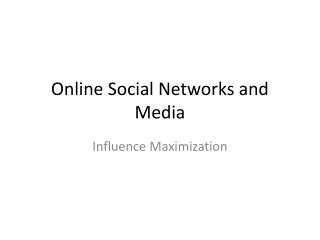 Online Social Networks and Media . Influence Maximization. Maximizing spread. Suppose that instead of a virus we have an item (product, idea, video) that propagates through contact Word of mouth propagation . An advertiser is interested in maximizing the spread of the item in the network

Social Media-A Powerful Weapon In Digital Marketing - We all know about social media and its capabilities. check the

Social Networking in the Workplace - . the good, the bad and the ugly. the top 10 most popular social networks (nov.

Online Social Networking - . thank you for the opportunity of speaking at your meeting! i’ve gone through the

How Mobile/Online Technology and Social Media Will Change the Way We Buy and Sell Vehicles - . john gottschalk, vp of

Use of Social Networking Media as a pedagogical Tool for Undergraduate Research - . adele creer isle of man college of

Social Networking - . what is social