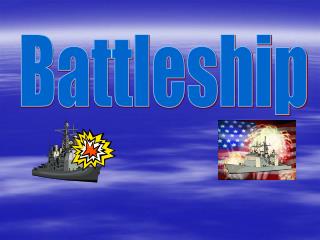 Assignment: BATTLESHIP - . before starting the assignment, read through the entire next slide. then, you must plan your

Manifestation Determination - . objective: a game to help the (future) educators get a better understanding of what

Battleship Potemkin 1925 - . directed by sergei eisenstein. the movie depicts a real-life event that occurred in 1905. it

battleship - This is a game