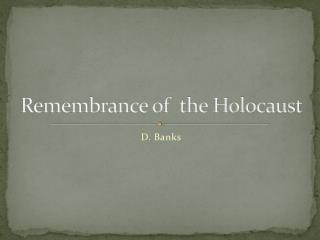 Remembrance of the Holocaust

Remembrance of the Holocaust

Memorial Day - Services across the u.s. pay tribute to those who

My Holocaust PowerPoint - . by: tyana a. moore.

Holocaust Memorial Day Trust Learning lessons from the past to create a safer, better future - Enquiries@hmd.org.uk

Memorial Day - . memorial day (decoration day) is a legal holiday in the united states. it occurs on the last monday in

Remembrance, participation, and reflection - . why do people build memorials? why is remembering the holocaust important?

Task: - Holocaust: a day of remembrance. task:. can people learn from the past, or does history repeat itself? through

Holocaust Remembrance Day: - . stories of freedom: what you do matters. 1933. hitler comes to power boycott jewish