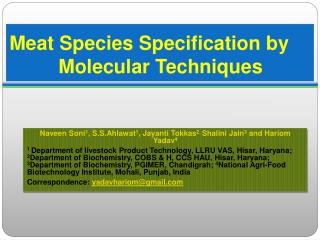 Specification Techniques - . overview. introduction what specifications can and can’t do how and when to use

Molecular Biology Techniques - . part 1. learning objectives. this lecture reviews some of the techniques used in

Formation of a molecular species - . it is the same as precipitates or gases except a liquid is formed. acid base

Specification Techniques and Formal Specifications - . system models are abstract descriptions of systems whose

TECHNIQUES IN MOLECULAR BIOLOGY - . centrifugation- separation of molecules/macromolecules/organelles according to the

Advanced Molecular Biological Techniques - . c.s.i. how do crime scene investigators (like dexter) perform so many