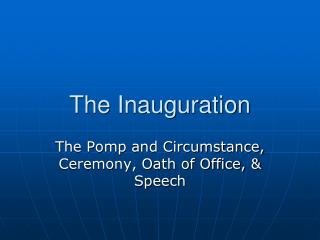 The Inauguration. The Pomp and Circumstance, Ceremony, Oath of Office, & Speech. The Inauguration. Occurs at the Capitol Building Until Ronald Reagan, it happened at the East Terrace It is the peaceful transfer of power Pomp & circumstance and pageantry What did you see?

Inauguration of the 16th ERU Symposium

Obama’s Inauguration - . by bryan r. his speech. http://www.youtube.com/watch?v=ato7btisxze. history of the