The Inauguration of the Gentile Mission - PowerPoint PPT Presentation 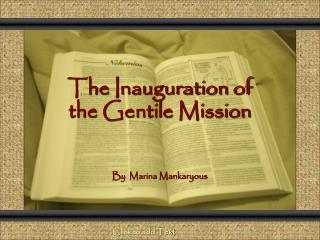 The Inauguration of the Gentile Mission Comunicación y Gerencia. The Inauguration of the Gentile Mission. By Marina Mankaryous. Click to add Text. Peter and Cornelius Acts 10:1-11:18. Acts 10: 1 – “Now in Caesara there was a man named Cornelius, a centurion of the Cohort called the Italica...”

The Inauguration of the Gentile Mission

GALATIANS 3 - Danger. the road ahead. galatians 3. galatians 3 the story so far. paul and barnabas had seen jew/gentile

The Inauguration - . the pomp and circumstance, ceremony, oath of office, &amp; speech. the inauguration. occurs at