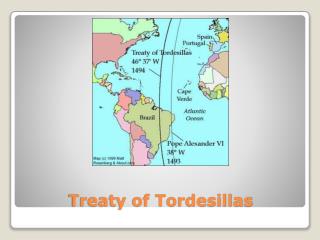 Treaty of Tordesillas. Signed between Spain and Portugal June 7, 1494 Ratified by Spain July 2 nd. Agreed to by Portugal on September 5 th . Designed to divide the world outside Europe. Intended to resolve disputes between the two powers when Columbus returned in 1493. Treaty of Tordesillas - . this map shows the division between spain and portugal lands in the newly discovered americas,

Treaty of Tordesillas - . spain and portugal were the first countries to make a push for exploration. the treaty of

Bellwork: December 11 th Objective: Explain the significance of the Treaty of Tordesillas - . what is meant by the

Treaty of Versailles - . punishment of germany. match up the opinions of the “big three” in your jotters. public

Treaty of Versailles - . historians views. background. the treaty is often compared to the treaty of brest litovsk this

TREATY OF VERSAILLES: - . losing the peace. taking a look back…. why did the united states enter into wwi?. u.s.

Treaty of Waitangi - . wasn’t there a declaration of independence before the treaty?. seems to be a lot of conflict

Treaty of Utrecht - . treaty of utrecht . what: a treaty signed between the british and the french why: ending a war

Treaty of Lisbon - . europe towards the xxi century. the way of lisbon treaty. i ndex. 1. countries of the european union

Treaty of Versailles - . versailles overview. 32 victorious countries met at the palace of versailles (just outside