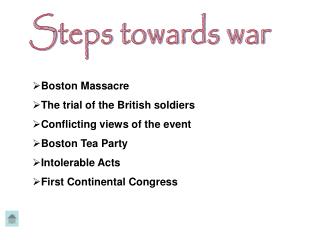 Arms Race and the First World War: Essential Background - 1 - . e.g. the daily mail ran many stories (such as this one by

Steps towards war - . boston massacre the trial of the british soldiers conflicting views of the event boston tea party

World War II Begins - . rise of dictators. leaders get power by playing on anger at end of wwi and versailles italy :

1857 War of Independence A Step towards Freedom - . an analysis. the causes of war. the war of independence was triggered

Unit Six: - . world war i. essential questions. how did mania create wwi? in what ways did the “war to end all wars”

Taking Care of Your Mind, Body, and Soul - Do you want a healthy mind and body? of course you do, but did you know it's