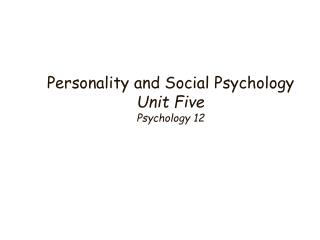 Social Psychology - . social psychology - studying the way people think about, influence and relate to others. attitude.

WHY STUDY ADDICTION IN AP PSYCHOLOGY? - . babies exposed to legal and illegal drugs in the womb may be born premature and

Personality Discussion - . how would you describe your own personality? is your personality the same as it was 5 years

Psychology: Personality - . extending beyond psychodynamics how our personal identity is formed. personality, what is it

Sport and Exercise Psychology - . chapter 9. sport and exercise psychology. what are the psychological benefits of

THE INDIVIDUAL DIFFERENCES APPROACH IN PSYCHOLOGY - . we are not all the same. lots of research looks at the