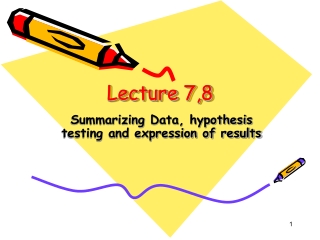 Lecture 7,8. Summarizing Data, hypothesis testing and expression of results. Purpose of Statistics. To describe & summarize information, thereby reducing it to smaller, more meaningful sets of data To make predictions or to generalize about occurrences based on observations