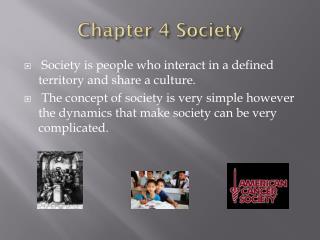 Chapter 4 Society. Society is people who interact in a defined territory and share a culture. The concept of society is very simple however the dynamics that make society can be very complicated. Gerhard Lenski. Chapter 4: Gender In Today’s Society - . the biological foundation of gender. sex – refers to biological traits that

Chapter 4: Energy, Chemistry, and Society - . what do you think of when you hear the word. energy?. like the energy of a

Chapter 4, Society And Social Interaction - . key terms. society a system of social interaction that includes both

Ch. 4 Society - . theories of society and social change. what is society?. a group of people who interact in a

WALZER CHAPTER 4: “Law and Order in International Society” - . what, if anything, morally justifies war? what is the

Chapter 4 Counseling in a Multicultural and Diverse Society - Why do we need to learn multicultural counseling?. why do

Unit 4 The Multicultural society - Part i pre-reading task. text a america as a collagecollage - a picture or design