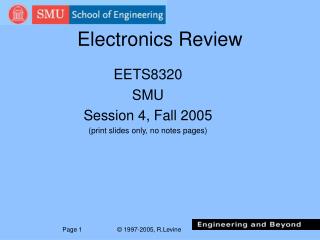 Electronics Review. EETS8320 SMU Session 4, Fall 2005 (print slides only, no notes pages). Electric and Magnetic Fields. When electric charges or currents (moving electric charges) interact at a distance, there are forces acting on the charges and currents. BU EE Department Electronics and MEMS Option - . faculty members in the field of electronics at the department of buee .

ENGIN 365 Electronics I Introduction - . matthew bell &lt;matthew.bell@umb.edu&gt;. what is microelectronics?.