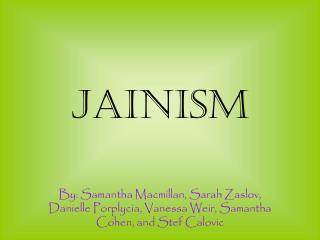 Jainism - . based on principle of ahimsa – non-violence to other living things and their souls believed that everything

Jainism - . by garrett bollinger, amy hammonds, and lauren pelaia. what do jains believe?. the way to liberation form the

Jainism - . by: lauren kratz and karley andrus. the beginning . orginated in india in the 6 th century b.c. founder:

JAINISM - . jain society of metropolitan chicago bartlett, il. what is religion?. “what holds one from falling from

JAINISM - . jainism. response to hinduism and rejection of castes system “founder”—mahavira or the last of 23

Jainism - . by: emily student. number of adherents. about 5 million followers today. www.altreligion.about.com. where and

JAINISM - . jainism. jainism-universe. 1 rajju. one rajju is the distance covered by a deva flying for six months at

Jainism - . by: jacob tebo and akshay jindal. basic beliefs. belief in animals and plants as well as humans, and they

Jainism - . history. jainism emerges at roughly the same time buddhism does in india, after the vedic period, but