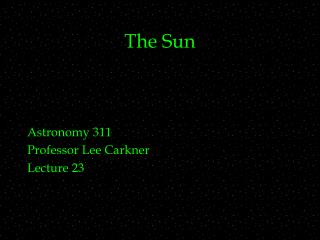 The Sun. Astronomy 311 Professor Lee Carkner Lecture 23. Helios -- The God of the Sun. The Sun was often worshiped by ancient people. WARNING !. NEVER LOOK DIRECTLY AT THE SUN NEVER LOOK AT THE SUN WITH BINOCULARS OR A TELESCOPE PERMANENT EYE DAMAGE CAN RESULT. Observing the Sun. THE SUN - Goals. summarize the overall properties of the sun.what are the different parts of the sun and how do we know

“The Sun” - . i life cycle of the sun:. a. stars are born in nebulas. b. nebula- a rapidly condensing cloud of gas

The Sun  - . the solar constant. what is the solar flux arriving at earth? use relation between luminosity and flux l

THE SUN - . the star we see by day. the sun, our star. the sun is an average star. from the sun, we base our

The Sun - Goals: -summarize the overall properties of the sun. -explain how energy travels from the solar core, through

The sun - . samantha lythgoe introductory astronomy 1040. what is the sun?. the sun is the nearest most easily studied

The Sun - . by: ashley murray. facts about the sun. weighs as much as 300,000 earths is the main source of energy for the

The Sun - . austin pectol. introduction. the sun is a main sequence star that is the center of our solar system and gives

The Sun - 1. the sun. the sun gives radiant energy to the plant to begin the process of photosynthesis. . 2. cargo plane

The Sun - . what are uv rays?. uv rays. they are invisible rays that are part of the energy that comes from the sun. 3