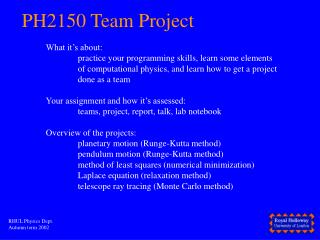 PH2150 Team Project. What it’s about: practice your programming skills, learn some elements of computational physics, and learn how to get a project done as a team Your assignment and how it’s assessed: teams, project, report, talk, lab notebook Overview of the projects:

IT's biggest project failures - and what we can learn from them - . eldad moneta reading course on software development.

Project 4 - . organize class in teams of 3 with one team of 2 mutli-pronged approach modifications of existing screens

The Honeynet Project - . your speakers. the team members. overview. the honeynet project honeynets the enemy learning