Use of Force - PowerPoint PPT Presentation 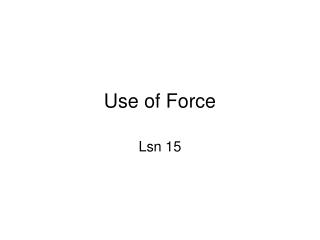 Use of Force. Lsn 15. Use of Force. The use of force almost always represents the partial failure of policy War is a continuation of “policy” (or “politics”) by other means. Clausewitz Because of the high costs of violence, the use of force is tempered by restraints and bargaining

STANDARD 2a - . students know a force has both direction and magnitude. forces. a force is a push or a pull force is a

Chapter 6 - . supply of labor to the economy: the decision to work. recall the trends in labor force participation that

Forces and Motion - . vocabulary. force - a push or pull on an object. net force – vector sum of all forces

Force and Motion Review - . a force is simply a push or a pull . all forces have both size and direction . do you

EQUIVALENT FORCE-COUPLE SYSTEMS - . section’s objectives : students will be able to: 1) determine the effect of moving

Ch.4 Forces And Newton’s Laws - . what is a force? a push or a pull. two types of forces: contact and non contact. non

Intermolecular Force - . enzymes. before knowing more about enzymes, we should have some basic concepts on intermolecular