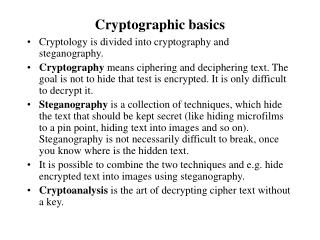 Cryptographic basics. Cryptology is divided into cryptography and steganography. Cryptography means ciphering and deciphering text. The goal is not to hide that test is encrypted. It is only difficult to decrypt it. The basics of immunohistochemistry - Department of clinical sciences faculty meeting – 4-14-11. the basics of