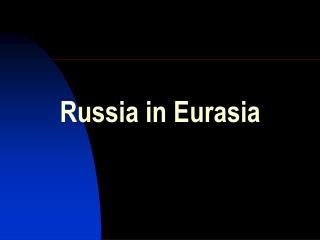 Russia in Eurasia. A Three-Dimensional View. Interstate relations - relations between the Russian state and other states Russia Chapter 13 Section 1 Sweeping Across Eurasia - . some geographers view europe and asia as one continent instead of

Eastern Europe, the Newly Independent States of Eurasia, and Russia - . background. evolution of mass media during the

Regional Responses in Western Eurasia - . ap world history chapter 12. russia and rule from afar. after they defeated the

IN RUSSIA - . who we are?. we are the first who aimed to incorporate russian inner policy within global environmental