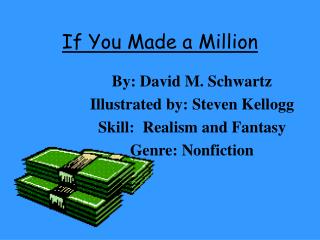 If You Made a Million

If You Made a Million - PowerPoint PPT Presentation If You Made a Million. By: David M. Schwartz Illustrated by: Steven Kellogg Skill: Realism and Fantasy Genre: Nonfiction. Question of the Day. What are some examples of situations in which you might prefer to have either coins or paper money?. Phonics Objectives:.

If You Made a Million

DOS Monday Which of the following would NOT make a good insulator? Rubber Plastic Wood Metal - . dos monday 2. what kind

If you had one million dollar, what would you do with it? - . do you agree or disagree?. &amp; why?. conversation

Math Problem-Solving Skill Use or Make a Table

My Million Dollar Project By: David Holland - . how i would spend 1 million dollars. charity &amp; taxes. i will give

A short history of nearly everything - . bill bryson chapter 1. sample on how we began. singularity. what it takes to

People I am thankful to have in my life - . make a list…. first, make a list of as many people as you can think of who

Welcome !! Please make a name tag like this ↓ - . c haracter traits that make you a good sea. favourite travel

The Earth: A blessing for Mankind - . by: zainab and zahra class

Our Dream House Million Dollar Project By Sophie, and Kaylee - . = our dream house!. how we spent 1 million

Why Hats? - . hats make a statement about the way a person thinks and feels and how they want others to think/feel about

Small things you can do to make big impact on Environment - . the 3 r’s of environmental protection- reduce, reuse,