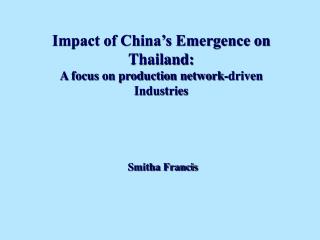 Impact of China’s Emergence on Thailand: A focus on production network-driven Industries Impact of China’s Emergence on Thailand: A focus on production network-driven Industries. Smitha Francis. Backdrop to the Growing Bilateral Relations. Thailand was one of the keenest adopters of the FDI-driven export growth paradigm among Southeast Asian economies from the mid-1980s.

Impact of China’s Emergence on Thailand: A focus on production network-driven Industries

China – Beyond the Olympics - . amy mulholland, m.ed. admulholland@gmail.com. purpose for today… think about china in

Lecture 3: Country in Focus: China and East Asian Crisis - . topics today why china, india and russia have had different