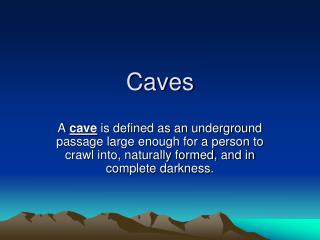 Caves. A cave is defined as an underground passage large enough for a person to crawl into, naturally formed, and in complete darkness. How does a cave form?. Rain dissolves Carbon Dioxide into Carbonic acid Carbonic acid dissolves minerals in rock Rock is sculpted in weak spots