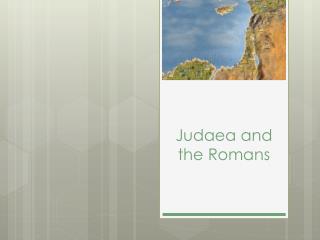 Judaea and the Romans Judaea and the Romans

Fall of Rome - . what factors contributed to the downfall of rome? can an empire survive without a stable form of

Romans #3 , The Manifestation of Divine Righteousness - . romans 3:21 - 5:21 righteousness is apart from the law abraham

Rome - . myths and legends. romulus and remus 6:20. roman republic. voters elect representatives in rome it was based on

Chapter 10 The Rise of Christianity - . the rise of christianity. chapter introduction section 1 the first christians

Doxology Romans 11:33-36 - . no one like god his knowledge his wisdom amazing ways of god mysterious god all -sufficient

Romans 8:5-11 - . 5 for those who live according to the flesh set their minds on the things of the flesh, but those who

Book of Romans - . the power of god for salvation. some observations. i believe romans is the magna carta of

Judaea and the Romans - . the jews and the romans. main idea : roman rule of judaea led some jews to oppose rome

Christianity and the Roman Empire - . chapter 9, section 2. the rise of christianity. romans conquer judaea in 63 b.c.