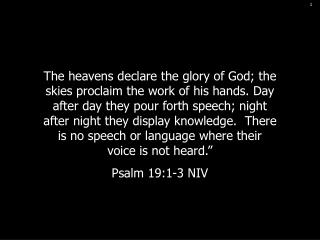 1. The heavens declare the glory of God; the skies proclaim the work of his hands. Day after day they pour forth speech; night after night they display knowledge. There is no speech or language where their voice is not heard.” Psalm 19:1-3 NIV. “When I consider your heavens, Cannons - . it's falling from the clouds a strange and lovely sound i hear it in the thunder and the rain. it's ringing