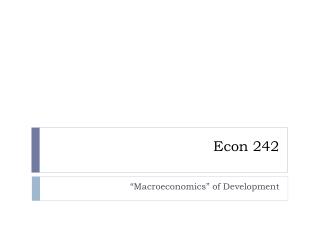 Openness in Growth Models Development Economics, 14.12.09 - . “trade which, without force or constraint, is naturally

CAPACITY DEVELOPMENT : WHAT DOES IT MEAN FOR GROWTH AND HUMAN DEVELOPMENT - . kanni wignaraja july 2007. why capacity