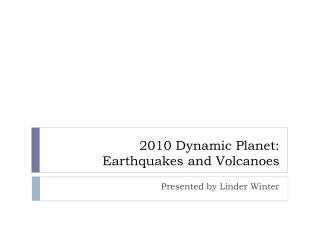 2010 Dynamic Planet: Earthquakes and Volcanoes. Presented by Linder Winter. Use of this PowerPoint Presentation. All images and content obtained from the web for use in this PowerPoint presentation falls under the Fair Use Policy for educational use.

Volcanoes - . what is a volcano?. an opening in the earth that erupts gases, ash, and lava.

Rocks and Volcanoes - For the food chain shown, which of the following changes would have the most severe consequences? a

Volcanoes - . volcanoes. a volcano is a weak spot in the crust where molten material, or magma , comes to the surface.

Plate Tectonic, Earthquakes, and Volcanoes - . what does all this have to do with biodiversity?. geologic time scale.

VOLCANOES AND EARTHQUAKES - . each dot on the map represents an earth scientist’s data. these dots most likely

Volcanoes - . a volcano is…. an opening in earth’s crust through which molten rock, gases, and ash erupt. also, the

Earthquakes - . definition. vibrations in the ground caused by a release of energy along faults, (breaks), in the

Volcanoes and Earthquakes NATURAL DISASTERS - . volcanoes: what are volcanoes?. volcanoes are an opening in the

Volcanoes and Earthquakes - . weak spot in crust where molten material (magma) comes to the surface. what is a volcano?.

THE PLANET AND YOU…. - The planet and you…. topics of discussion . plastics recycling fluoride chlorine personal care