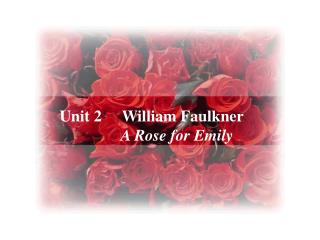 William Faulkner - . born in new albany, mississippi on september 25 th 1897 attended the university of mississippi for

William Faulkner The Epitome of the Southern Renaissance - William faulkner. 1. literary statusgiant and modern master of

A Rose for Emily - . class discussion emily seen from multiple perspectives . discussion questions. 1. one group: is the

The Story of an Hour, The Yellow Wallpaper, A Rose for Emily, and The Lottery - . vocabulary instruction. tumultuous. now

Aim: How does William Faulkner’s As I Lay Dying utilize the stream of consciousness technique?

“A Rose for Emily” - . by william faulkner. william

Questions?? - . when and where was william faulkner born? why did he get denied from the army? what did he do to support

Emily Dickinson - . by chase allday. birth. emily dickinson was born on december 10, 1830 in amherst, massachusetts she