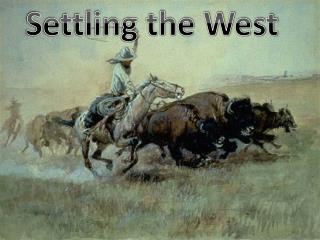 Settling the West. There’s gold in them thar hills!. Placer Mining was used to extract gold & minerals from the ground, but only the shallow level of ground was penetrated with this method. . Equipment like picks, shovels and pans were used in Placer Mining. Panning for Gold.

Settling the West - . theme: after the civil war, whites overcame the plains indians’ fierce resistance and settled the

Coming To America: Settling Jamestown - . a sailors account of the first days in the new world. coming to america. in

Settling the West - . people move out west. after the civil war, many people started moving out west what was the draw?

Migrating West - . 9.1. objectives. trace the settlement and development of the spanish borderlands. explain the concept

5-2 Settling on the Great Plains - . settlers move westward to farm. how did the transcontinental railroad open up the

Settling on the Great Plain - . homesteading and life on the plain. railroads move west. 170 million acres, worth half a

Settling the West People, Places, and Terms - . chapter 13 section 1 cultures class on the prairie. boomtowns - these

Settling the West 1865-1890 - . key question. why did conflicts arise between native americans &amp; the settlers?

Chapter 17 - . road to the civil war. section 1 settling differences regions grow further apart what were the sections of