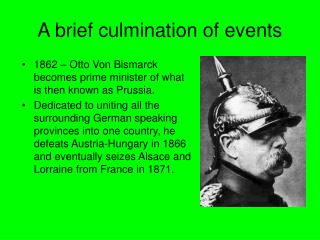 A brief culmination of events 1862 – Otto Von Bismarck becomes prime minister of what is then known as Prussia. Dedicated to uniting all the surrounding German speaking provinces into one country, he defeats Austria-Hungary in 1866 and eventually seizes Alsace and Lorraine from France in 1871. A brief culmination of events.

A brief culmination of events

Independent Events - . independent events are two events in which the occurrence of one has no effect on the probability

Current U.S events - . created by noah w., and aidan b. intro. these are just some events that have happened in the u.s

Events and interactivity - . ip 10 mr. mellesmoen 2014. how are events useful?. so far all we have create some

Track Events - . created by: yanique humphrey usain bolt. what are track events?. running events which take place on a Bartlett Events - . the event of your dreams… …without losing sleep. about bartlett events. locally owned and

Chapter 17: Handling Events - . basics of events handling. the concept of event-driven programming in contrast with