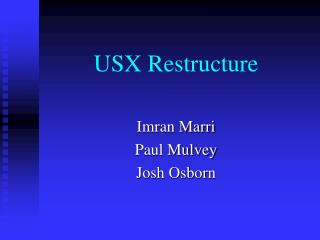 MSM Chapter 200, Hospital Services Public Workshop - . the purpose of this workshop is to seek public comment on and

To Revise and Improve Writing - . using gen ed assessment to inform and influence teaching. guiding questions. how do

Alternative Restructuring Strategies - . experience is the name everyone gives to their mistakes. —oscar wilde. exhibit