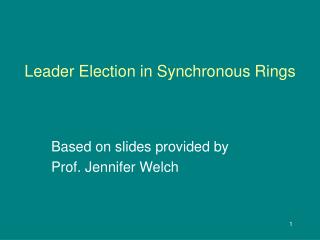 The 21 Indispensable Qualities of a Leader - . this presentation adapted from the book of the same title by john c.

Leader Election - . leader election (le) problem. in a ds, it is often needed to designate a single processor (i.e., a

The COMELEC Report - . the national electoral reform summit of 2002. evaluation of the 14 may 2001 elections.

PRESENTATION ON SYNCHRONOUS MACHINE MODEL - . tandin jamtsho student #3226091. this presentation shall cover the

The Lord of the Rings - . the book and the film which have the phenomenal reputation. the story for all time. it is