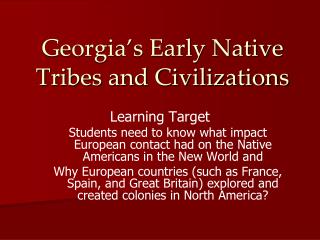 Georgia’s Early Native Tribes and Civilizations. Learning Target Students need to know what impact European contact had on the Native Americans in the New World and Why European countries (such as France, Spain, and Great Britain) explored and created colonies in North America?. The Tribes of Israel - . the tribes of israel : banners. tribe banner reuben red with mandrakes simeon green with

Plants &amp; Civilizations A s in the P ast , even to-day, medical - Knowledge is passed on by word of from