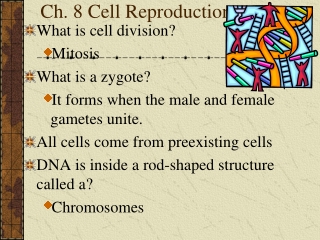 Ch. 8 Cell Reproduction. What is cell division? Mitosis What is a zygote? It forms when the male and female gametes unite. All cells come from preexisting cells DNA is inside a rod-shaped structure called a? Chromosomes. Chromosomes.