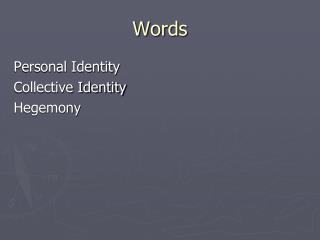 Words. Personal Identity Collective Identity Hegemony. Housekeeping. You will have a quiz on Friday. It will be a word find on the terms we’ve addressed in Class. It will be fun! Not, to worry!. Chapter 1. Identity and Ideology Social 30. Quick review. What is Individualism?

Words Their Way and Word Study in Third Grade - . the goal is to teach our children to become word solvers . . . to read

Etymology of the English Word-stock - . etymology (gr. etymon “truth” + gr. logos “learning”) is a branch of