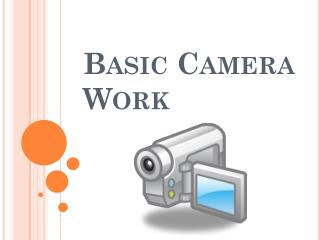 Basic Camera Work. The Shot. Each continuous shooting period, from the moment the camera starts shooting until it stops is called a shot. Each new shot should lead you on to the next. With a new shot within a scene you want to change camera viewpoint, angle, or distance. Shot Duration. Digital Cameras - . an introduction to digital cameras and the basic parts of a canon a85. one of the 1 st digital

Introduction to Photography - . child and her mother - dorthea lange. photography is art created by light!. photography

Knowing Your Camera - . the details that will make you a pro. what is a dslr?. dslr stands for d igital s ingle l ens r

Digital Photography: Beyond Point &amp; Shoot Cameras - . a basic discussion for people who love to take photos, but

Camera Positions (Shots) - . extreme long shot (xls). a shot that reveals a great exposure. this creates a series of

Parts and Functions of a DSLR Camera - . photography 101 by justine agaloos. dslr

Cameras - . first photograph due to niepce first on record shown in the book - 1822 basic abstraction is the pinhole