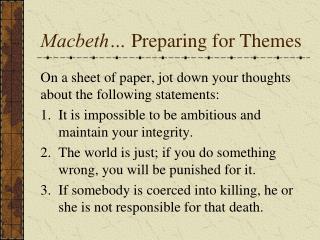 Macbeth… Preparing for Themes. On a sheet of paper, jot down your thoughts about the following statements: It is impossible to be ambitious and maintain your integrity. The world is just; if you do something wrong, you will be punished for it.

Characters - . duncan. king of scotland good guy liked by his people too trusting – has blind faith. macbeth. thane of

Macbeth Terminology - . terminology. as we read various scenes and sections of the play, you will need to look out for

NCMRG Training - . welcome and prayer colette stevenson. to update you on the work of the ncmrg and update you on